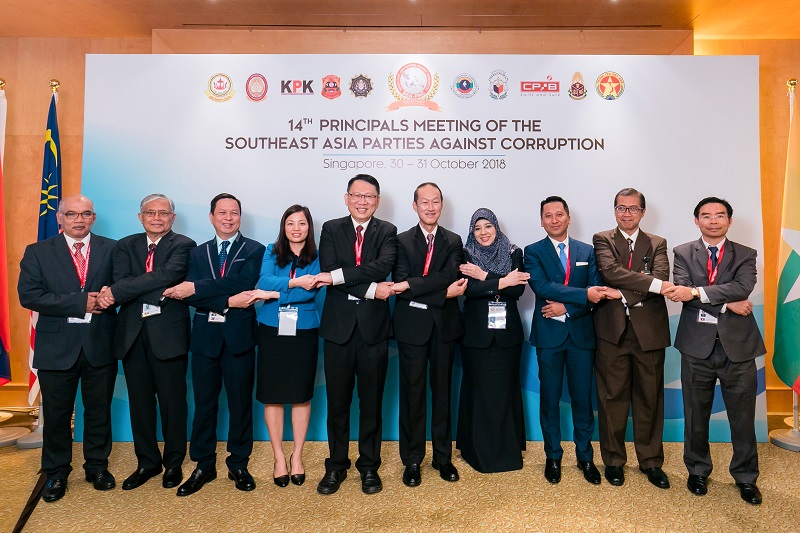 In a globalised world where corruption can be transnational in nature, CPIB plays an active role in the international community’s fight against corruption. In this regard, CPIB participates in a number of international platforms which seek to bring together relevant stakeholders to tackle the global scourge of corruption. In addition to the United Nations Convention Against Corruption (UNCAC) that forms the bedrock of our international engagement, CPIB represents Singapore at various fora such as the Asian Development Bank (ADB)-Organisation for Economic Co-operation and Development (OECD) Anti-Corruption Initiative for Asia and the Pacific, the Asia-Pacific Economic Cooperation (APEC) Anti-Corruption and Transparency Experts’ Working Group (ACTWG), the Economic Crime Agencies Network (ECAN), the G20 Anti-Corruption Working Group (ACWG), International Association of Anti-Corruption authorities (IAACA) and the South East Asia - Parties Against Corruption (SEA-PAC) meetings between parties of a regional Memorandum of Understanding (MOU). Besides these, CPIB is a founding member of the International Anti-Corruption Coordination Centre (IACCC) which coordinates global law enforcement responses to allegations of grand corruption. CPIB also undertakes speaking engagements at regional and international capacity building seminars where we share Singapore’s anti-corruption experience. Basic information on the various anti-corruption platforms which CPIB is involved in may be found below.

ADB/OECD Anti-Corruption Initiative for Asia and the Pacific

In 1999, the Asian Development Bank (ADB) and Organisation for Economic Co-operation and Development (OECD) launched the ADB/OECD Anti-Corruption Initiative for Asia and the Pacific.

There are currently 31 countries and jurisdictions of the Asia-Pacific which are party to the Initiative, including Singapore (represented by CPIB) which endorsed the Initiative’s Action Plan in November 2001. The Initiative supports member governments’ efforts to implement goals and standards for sustainable safeguards against corruption in the economic, political and social spheres through fostering policy dialogue, policy analysis and capacity building. As a member of the Initiative, CPIB attends Annual Steering Group Meetings held to discuss countries’ efforts to implement the Action Plan as well as the Initiative’s periodic Regional Conferences which gather policymakers, civil society and business sector representatives to assess progress and exchange ideas.

It also promotes cooperation in areas such as extradition, legal assistance and judicial/law enforcement (especially asset forfeiture and recovery). Recognizing the importance of its work, the ACT Task Force was upgraded in status to a Working Group in March 2011, and meets twice a year at the side-lines of the APEC Senior Officials’ Meeting (SOM). It has also recently led to the establishment of the APEC Network of Anti-Corruption Authorities and Law Enforcement Agencies (ACT-NET), an informal network for sharing information and exchanging best practices and techniques among anti-corruption and law enforcement authorities in the Asia-Pacific region, to assist in detecting, investigating and prosecuting corruption, bribery, money laundering, and illicit trade. Singapore, an APEC economy, is represented at the APEC ACT Working Group and ACT-NET meetings by CPIB.

Established in February 2013, ECAN is a formal network of law enforcement organisations involved primarily in the investigation and prosecution of economic crimes. CPIB is member of this Network, which includes 12 law enforcement agencies from various jurisdictions such as Australia, Canada, the European Union, Hong Kong, Indonesia, Malaysia, New Zealand, Nigeria, the United Kingdom and the United States. CPIB regularly attends annual ECAN meetings and had hosted the Network’s second meeting in 2014.

The Group of Twenty or G20 is an international forum comprising of countries from 20 major economies. In 2010, G20 Leaders established the ACWG at the Toronto Summit in 2010 in recognition of the significant negative impact of corruption on economic growth, trade and development. Since 2010, the work of the ACWG has been guided by two-year action plans that include commitments by G20 countries to ratify and implement the United Nations Convention against Corruption, criminalise and prosecute foreign bribery, and cooperate with other countries to investigate, prosecute and return the proceeds of corruption. Singapore has been attending G20 meetings as a guest country since 2011 and in this regard, CPIB attends the G20 ACWG meetings which are usually held thrice a year.

IAACA was established in October 2006 with the aim of facilitating the implementation of UNCAC and advancing the agenda of international cooperation against corruption. Spearheaded by the People’s Republic of China (PRC) with support from the United Nations Office on Drugs and Crime (UNODC), the IAACA currently has more than 300 organizational members comprising of law enforcement institutions tasked with fighting corruption, and more than 2000 individual members including prosecutors, investigators and experts with experience in anti-corruption research or practice.

CPIB has seconded a senior officer to the IACCC since September 2017, who works closely with representatives from the other foreign agencies on board the IACCC to coordinate global law enforcement responses to allegations of grand corruption.

ASEAN-PAC was established through the Memorandum of Understanding (MOU) on Cooperation for Preventing and Combating Corruption, which was initially signed by anti-corruption agencies from Brunei, Indonesia, Malaysia and Singapore on 15 December 2004.

The ASEAN-PAC MOU has subsequently been signed by anti-corruption agencies from Cambodia, Philippines, Thailand, Vietnam, Laos and Myanmar. The objectives of ASEAN-PAC are: (1) to establish and strengthen collaborative efforts against corruption among the Parties and; (2) to increase capacity and institutional building among the parties in preventing and combating corruption. As a founding member of ASEAN-PAC, CPIB attends regular ASEAN-PAC Annual and Secretariat meetings which are convened to implement the objectives of the MOU.

UNCAC is an international legal instrument against corruption which is regarded as the universal standard for anti-corruption measures. It currently comprises 175 States Parties and its objectives are:

a. To promote and strengthen measures to prevent and combat corruption more efficiently and effectively; b. To promote, facilitate and support international cooperation and technical assistance in the prevention of and fight against corruption, including in asset recovery; c. To promote integrity, accountability and proper management of public affairs and public property.

States Parties to the Convention are obliged to implement and adhere to its provisions which cover five main areas of prevention, criminalization and law enforcement, international cooperation, asset recovery, and technical assistance and information exchange. Singapore signed the UNCAC on 11 November 2005 and ratified it on 6 November 2009.

To review States Parties’ implementation of their obligations under the UNCAC, a country review process was established in 2009, whereby each State Party will be reviewed by two other States Parties. Singapore had been a reviewing State Party for Argentina in 2010 and El Salvador in 2012. Singapore underwent its own review of its implementation of UNCAC chapters III (Criminalisation and Law Enforcement) and IV (International Cooperation), in the fourth year of the current review cycle (2013/2014), with Lebanon and Swaziland as its reviewers. The next cycle of the review concerning States Parties’ implementation of UNCAC chapters II (Preventive Measures) and V (Asset Recovery), is expected to commence in end-2015 and is likely to end in 2020.