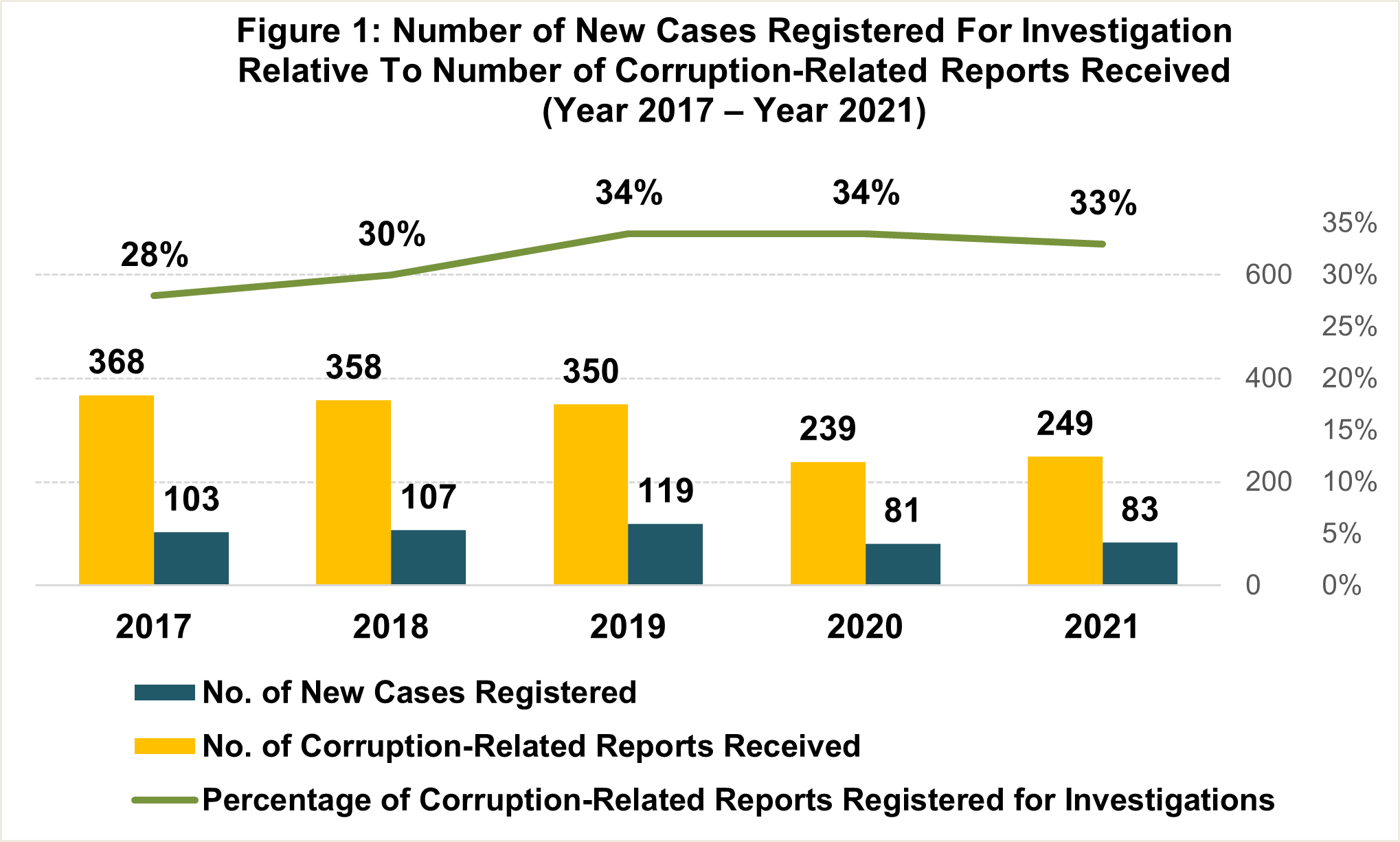 4. CPIB treats all reports received seriously regardless of whether the complainant is named or anonymous. We will assess these reports objectively based on the merits of the information provided. Of the 83 cases registered for investigation in 2021, 16 (19%) were from anonymous sources.1 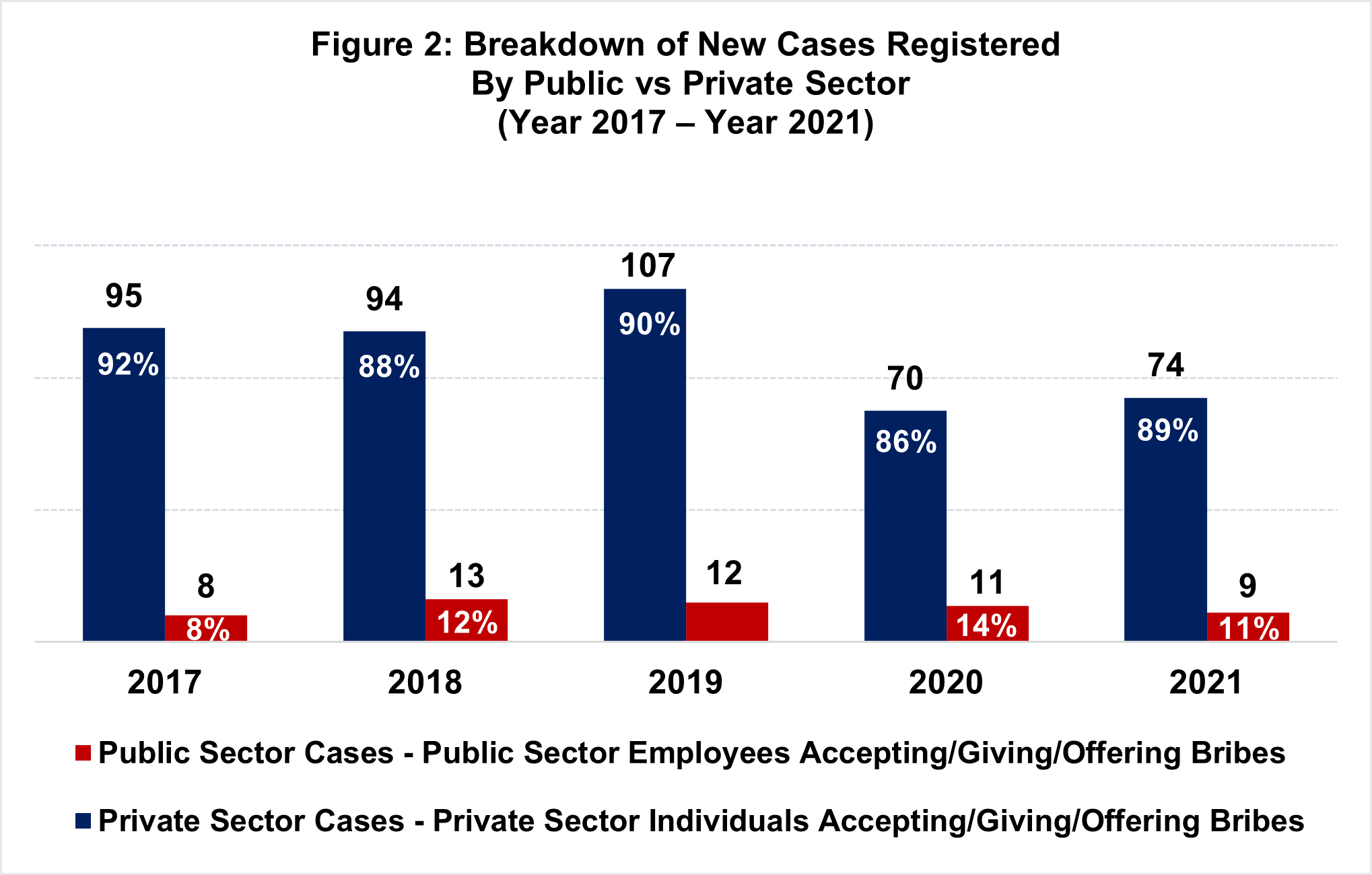 Majority of Individuals Prosecuted in Court were from the Private Sector

6. In 2021, 165 individuals were prosecuted in Court for offences investigated by CPIB. Of these, 93% (154) were private sector individuals while the remaining 7% (11) were public sector employees (Figure 3). 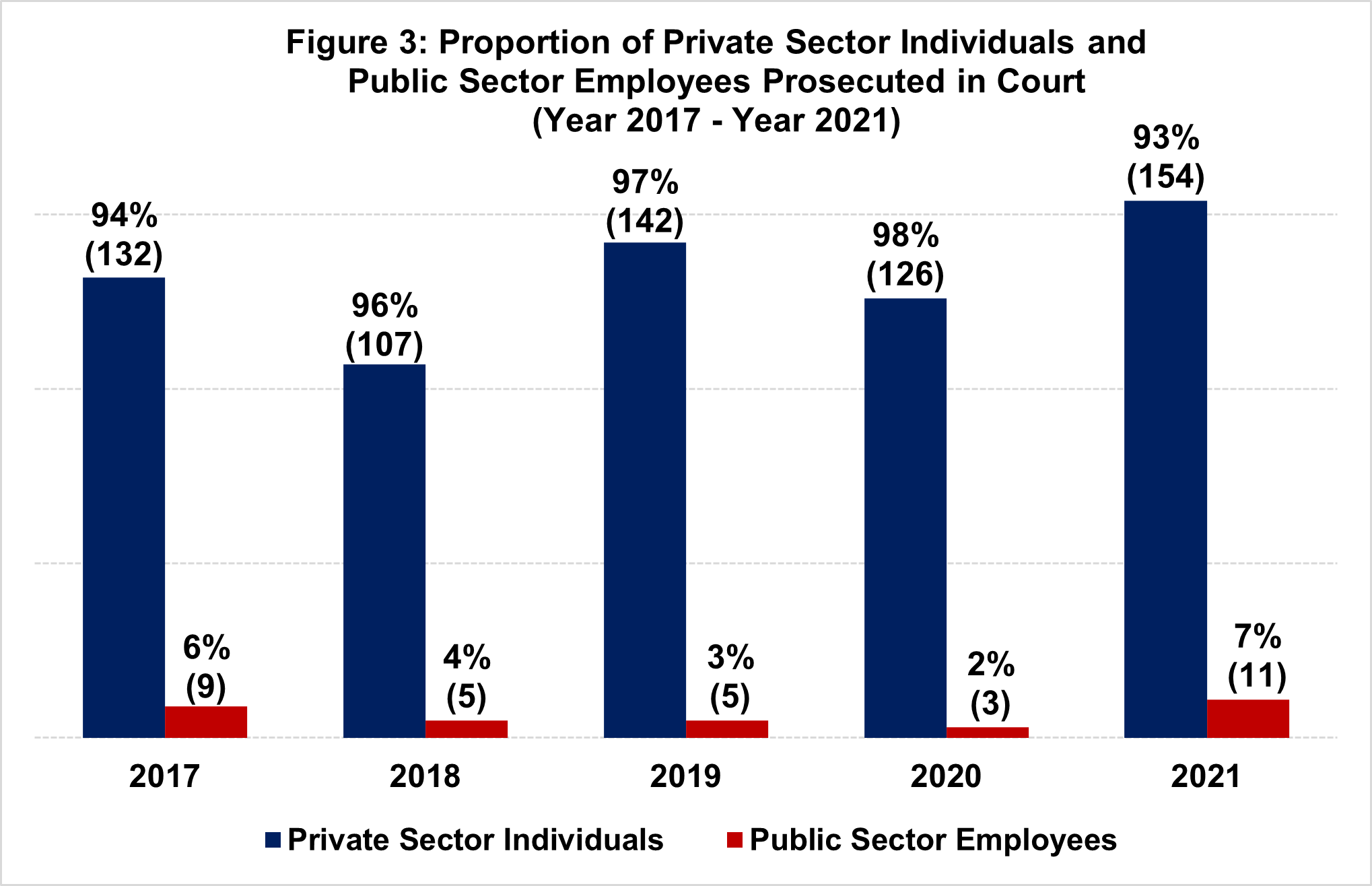 7. Despite workplace disruptions due to the COVID-19 pandemic, CPIB achieved a high clearance rate, 3 completing investigation into 87% of subjects investigated in 2021 (Figure 4). 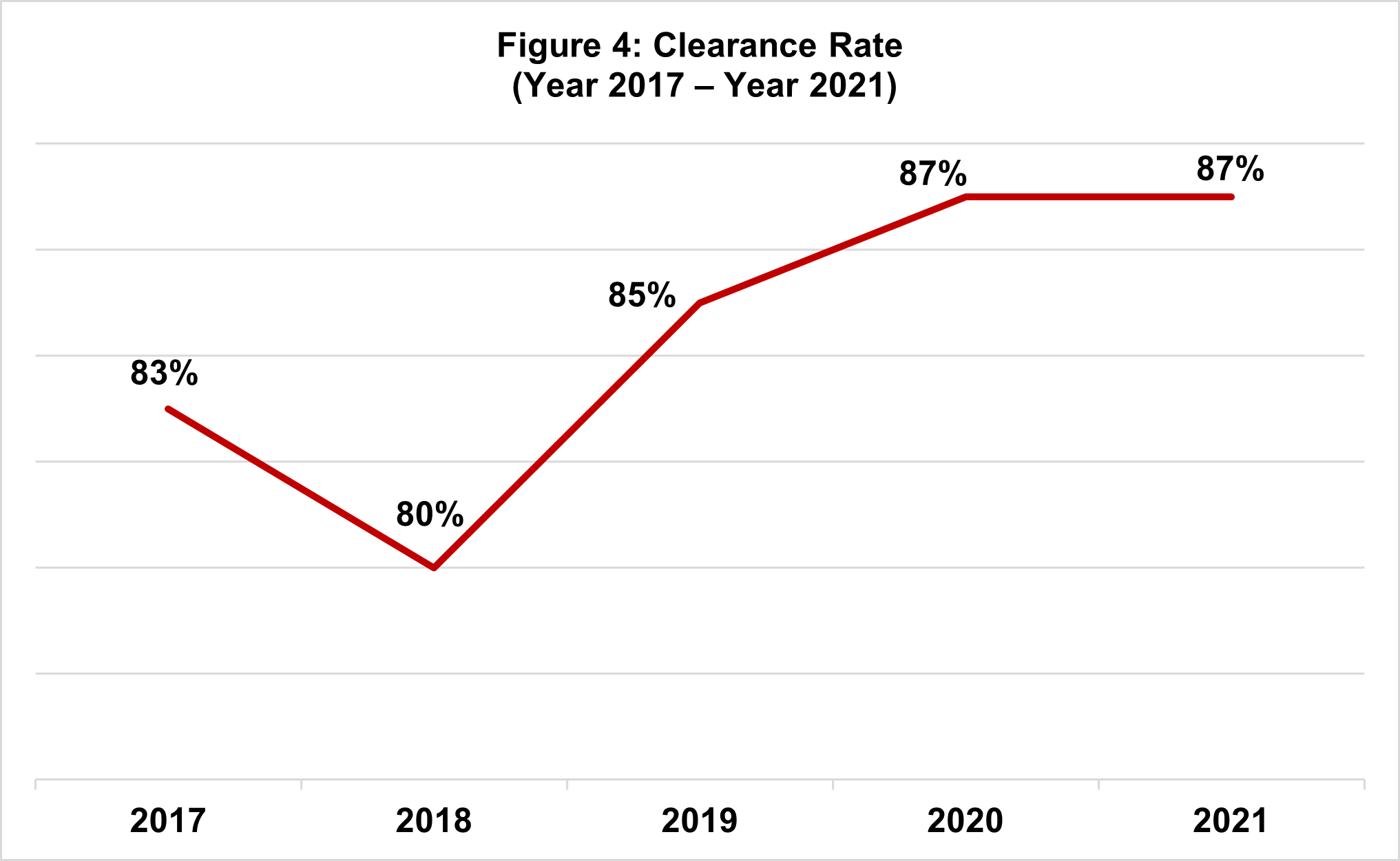 8. The conviction rate in 2021 stood at 98% (Figure 5). The consistently high conviction rate is testament to the high quality of the Bureau’s investigation to be able to stand up to scrutiny in Court, as well as the working relationship between CPIB and the Attorney-General’s Chambers (AGC) in bringing corrupt offenders to task. 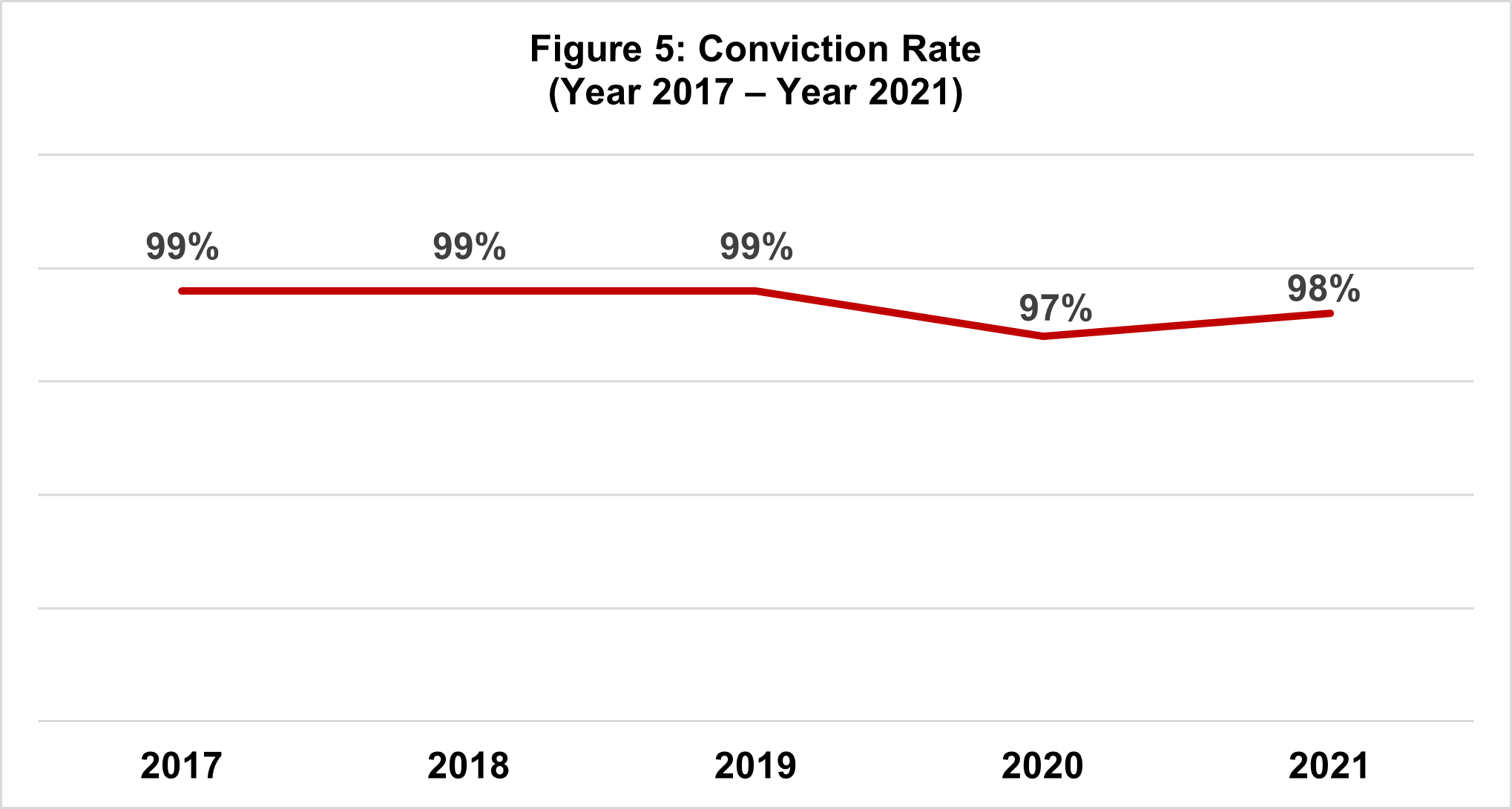 9. Singapore continues to be well-regarded internationally for our anti-corruption framework and efforts. The latest TI-CPI continues to rank Singapore amongst the top five least corrupt countries in the world. In 2021, Singapore was ranked 4th out of 180 countries; and maintained our high score of 85 out of 100. The Political and Economic Risk Consultancy ranked Singapore as the least corrupt country in its 2022 Report on Perceptions of Corruption in Asia, the US and Australia, a position we have held since 1995. In the World Justice Project Rule of Law Index 2021, Singapore was ranked 3rd for absence of corruption in government, and was the top Asian nation out of 139 countries ranked.

10. While CPIB has not observed an increase in the number of corruption cases in Singapore arising from the COVID-19 pandemic, we take such cases seriously and will not hesitate to take firm enforcement action as they can have wider consequences. The following case illustrates how CPIB takes a serious view of any misconduct which may jeopardise the Government’s efforts to ensure a COVID-safe Singapore through vaccination.

On 13 January 2022, Singaporean Tan Li Ming Kelvin (Kelvin) was charged in Court for allegedly attempting to bribe a vaccination nurse at Healthway Medical Group located within the Choa Chu Kang Community Club. It was alleged that on 26 October 2021, Kelvin offered the nurse a bribe of S$50 and asked her to reflect in the system that he had received his second dose when it was not administered. The nurse rejected his offer and reported the matter to the Duty Health Services Manager. Although the bribe amount in this case was small, Kelvin’s action can undermine the Government’s efforts against COVID-19. Kelvin’s case is currently before the Courts.

11. Interview and interrogation tradecraft remains the cornerstone of successful corruption investigations by CPIB. Our investigation officers also approach their work meticulously and with strong tenacity. This is vital in enabling CPIB to uncover the truth in our investigations.

Case 2 – Safeguarding the integrity of the Public Service

Through skilful interviews and meticulous review of documents by CPIB investigators, it was revealed that between 2017 and 2018, Jamaludin had obtained bribes totalling S$45,169 on multiple occasions from Ganisan in return for facilitating and expediting works performed by Pipe Works and supervised by Jamaludin. This included Jamaludin hastening the approval process when Pipe Works submitted applications to PUB, and telling the main contractor to give Pipe Works priority in laying pipes. Jamaludin also attempted to obtain a bribe of S$500,000 from another company which submitted a bid for a PUB tender in 2019, in return for purportedly assisting the said company to win that tender.

Further investigations by CPIB revealed that Jamaludin prepared false invoices from a company, Daeyul Services, which he had set up to receive monies from Ganisan. On 23 November 2017, an invoice from Daeyul for a sum of S$39,810 was billed to Pipe Works for cleaning services even though no such service was rendered.

12. To complement the interview and interrogation tradecraft of our investigation officers, CPIB has intensified efforts to enhance our investigative support capabilities in areas such as digital forensics.

On 31 March 2022, Liaw Jinle and Tan Wei Jie Sandy were convicted of cheating and corruption offences. Liaw, a laboratory executive at the National University of Singapore’s (NUS) Centre of Advanced 2D Materials, was sentenced to 20 months’ and two weeks’ imprisonment while Tan, a sole proprietor, had his sentencing adjourned so as to make restitutions to NUS. Investigations by CPIB revealed that in 2019, Liaw agreed to help Tan obtain procurement contracts at NUS. As Liaw had loaned money from Tan, Tan hinted that the profits from these contracts could go towards repaying the loan. Under this arrangement, Liaw assisted Tan in obtaining 31 contracts from NUS, amounting to S$136,772.52 between March and December 2019. Digital forensics conducted by CPIB on Liaw’s digital devices uncovered incriminating evidence pointing to the arrangement between Liaw and Tan. Confronted with this evidence, Liaw and Tan admitted to their offences.

13. From time to time, CPIB’s investigations may surface new corruption risks. CPIB would respond by developing targeted prevention initiatives to take the fight against corruption upstream.

This case, which mainly involved young Singaporeans, highlighted that corruption is a scourge which even our youths can succumb to. In recent years, CPIB has engaged young Singaporeans in our prevention and outreach efforts to reinforce the values of integrity and incorruptibility as well as to emphasise the pitfalls of corruption.

Singapore Together in the Fight Against Corruption

14. In line with the Singapore Together movement, CPIB leverages strategic partnerships with broad segments of the community to draw ideas, tap on their expertise and co-create initiatives to strengthen CPIB’s core capabilities, as well as bolster corruption prevention and outreach efforts.

15. CPIB signed a Memorandum of Understanding (MOU) in February 2021 with the Institute of Singapore Chartered Accountants (ISCA), which has enabled the Bureau to develop anti-corruption programmes with the accountancy profession and the wider business community. In August 2021, CPIB participated in ISCA’s Professional Accountants in Business Conference and shared on the financial costs of corruption to businesses and steps they could take to mitigate corruption risks. As part of outreach and corruption prevention efforts targeting the accounting profession, CPIB and ISCA co-created an e-learning core module for ISCA members entitled “Anti-Corruption & Ethics: Relevance to Accounting & Finance Professionals”, which highlighted the important role accounting and finance professionals played in detecting and deterring corruption.

16. CPIB’s Anti-Corruption Partnership Network (ACPN) was established in 2018 to promote ownership amongst private sector entities over the prevention of corruption. The most recent virtual ACPN event was co-organised with the United Overseas Bank (UOB) in February 2022. ACPN membership was also expanded to include selected financial institutions and associations. The network currently has a total of 58 organisations having joined as members.

17. To take the fight against corruption upstream, CPIB has co-created corruption prevention solutions together with IHLs such as Nanyang Polytechnic (NYP). Over the past two years and under the CPIB-NYP MOU, CPIB has collaborated closely with lecturers and students of NYP to tap on their expertise to co-create a series of novel digital initiatives aimed at inculcating the values of integrity and incorruptibility in our youths. One recently-completed project was the web game Corruzione which tapped on NYP’s expertise in gamification technology and digital media. Riding on a gaming environment to enhance learning and awareness of corruption issues in a fun way, the web game is an integral component in CPIB’s Anti-Corruption Badge Programme (ACBP) for uniformed groups and for youths in general. In continuation of this CPIB-NYP partnership, an animated educational series targeting lower primary and pre-school children is currently being developed. The animated series will focus on spreading the anti-corruption message and inculcating important values such as honesty, fairness and integrity in a fun and engaging way, and will be made available as an educational resource for schools and parents.

18. Following the successful collaboration with the National Police Cadet Corps (NPCC), the Bureau has further expanded our ACBP with the Singapore Scout Association (SSA). From our experience with NPCC, the ACBP has been an effective corruption prevention initiative that not only emphasises important values such as integrity and fairness but also develops a better understanding of corruption amongst our youths. In 2021, a tailored ACBP was piloted with 100 Scouts at the secondary- school level. Following good feedback from this pilot, CPIB is working with the SSA to develop a tailored ACBP for the entire Scouts community, from seven-year-old Cub Scouts to 18-year-old Venture Scouts. CPIB plans to expand the ACBP to touch more youths and uniformed groups.

19. CPIB will commemorate our 70th anniversary this year and mark this milestone with a series of initiatives and activities. This includes the launch of CPIB’s first-ever History Book, titled “Scrupulous, Thorough, Fearless – The CPIB Story”, which chronicles Singapore’s challenges and successes in our country’s anti-corruption journey as well as provides insights on CPIB’s work. The book is co-created with historian Dr Clement Liew and a joint team of CPIB officers and Yale-NUS College students with the President of the Yale-NUS College, Professor Tan Tai Yong as Advisor. It will be a useful resource for present and future generations of Singaporeans on how incorruptibility in Singapore has been painstakingly ingrained and should never be taken for granted. In keeping with our ‘many helping hands approach’, CPIB will also reinforce our public education touch-points with Singaporeans through the production of a three-episode documentary series with Mediacorp which will showcase corruption cases of interest.

20. Despite disruptions caused by the COVID-19 pandemic in 2021, CPIB continued to maintain operational readiness and effectively conducted fair and thorough investigations to take corrupt offenders to task. In addition, CPIB intensified our transformation efforts to enhance our investigations and operational capabilities. We also expanded our pool of strategic partners to leverage their networks and expertise to strengthen our prevention and outreach initiatives. As we commemorate our 70th anniversary in 2022, CPIB would like to thank our partners as well as the public for helping us in our mission to keep corruption at bay, and we look forward to your continued support in our effort to fight corruption without fear or favour. 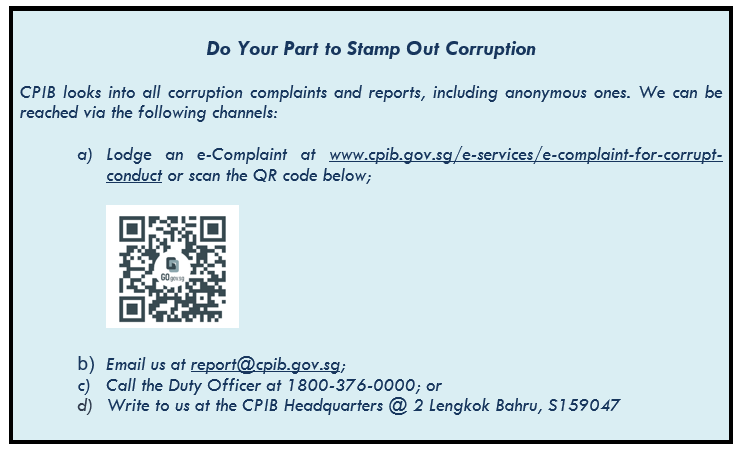 [1] Of the 249 corruption-related reports received in 2021, 99 (40%) were anonymous.
[2] Public sector employees who rejected bribes in 2021 comprised officers from the Ministry of Manpower and the Singapore Police Force (SPF).
[3] Clearance rate refers to the total number of subjects whom CPIB has completed investigation on, out of the total number of subjects investigated by CPIB in the year.
[4] Jamaludin was sentenced to nine months’ and ten weeks’ imprisonment respectively for each of two corruption charges to run consecutively. A two-week imprisonment, to run concurrently, was imposed for a falsification of accounts charge.