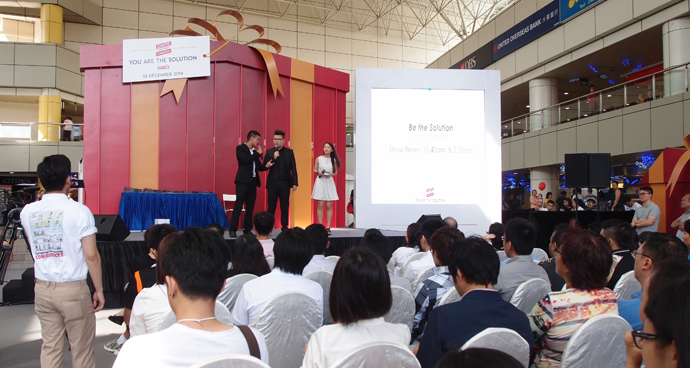 On 13 December 2014, the Bureau held its annual Roadshow at Toa Payoh’s HDB Hub Mall Atrium. Under the overarching theme of Unite Against Corruption: You are the Solution, more than 2,500 members of the public got the opportunity to learn more about corruption and how they could play a proactive role in combating corruption in Singapore.

The public, young and old alike, participated actively in the fringe activities such as quizzes, matching game and even pledged their support in Singapore’s fight against corruption.

Through a light hearted and entertaining skit performance entitled Be the Solution, the audience learnt how corruption could occur in day-to-day life and what they could do to stand up against such corrupt practices. The use of Augmented Reality (AR) and interactive exhibition panels managed to capture the interest of onlookers to step forward and learn about corruption.

At the event, Director (Investigations) of the CPIB, Mr Wong Choong Mann also presented prizes to the winners of the Unite Against Corruption Video Competition which attracted 95 entries and produced 35 winning videos. The highly coveted Viewer’s Choice Award, which was voted by the public via YouTube, was also revealed at the Roadshow.

The Football Association of Singapore (FAS) – our partner for the event had enlivened the Roadshow with their mascot and football activity. The organisers, the volunteers and the members of the public had all participated enthusiastically and made this event a resounding success.