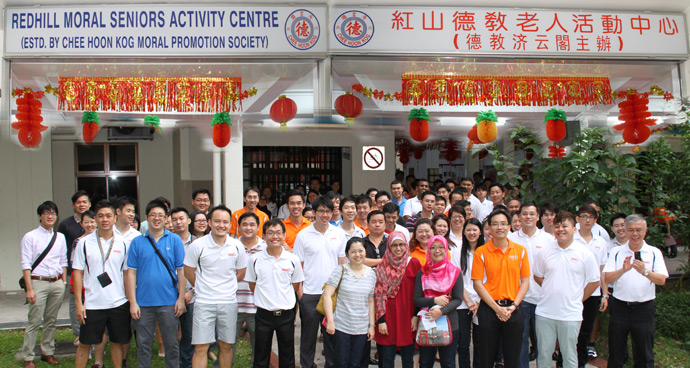 CPIB constantly encourages its officers to contribute to the community and to reach out to the underprivileged. For many years, the Bureau has been organising yearly food distribution during Chinese New Year to distribute food and necessities to the underprivileged elderly in the Redhill estate which is located near to the CPIB.

The tradition first started with a group of kind-hearted CPIB officers who wanted to make a small difference in the lives of some elderly. On their own initiative, they bought Christmas gifts for the elderly from funds donated by colleagues. Subsequently, this became an organised effort and the gifts were given out during Chinese New Year. Even though Chinese New Year was chosen, the non-Chinese households were not excluded and the elderly enjoyed the same benefits.

Since then, that tradition has continued. Without fail, every Chinese New Year, the CPIB officers would spring into action. On 13 January 2012, the CPIB and the Prime Minister’s Office Headquarters (PMO HQ) came together and distributed welfare packs with staple food products, medication and daily necessities to more than 200 households of underprivileged elderly. These packs were bought with funds donated by the staff of the CPIB and PMO. The extra packs were donated to the Redhill Moral Senior Activity Centre that serves the senior residents of the Redhill estate. In the subsequent years (2013-2015) colleagues from the National Population and Talent Division (NPTD) and Elections Department (ELD) also joined the Bureau in this meaningful endeavour.

In August 2012, the CPIB organised a spring cleaning session for these underprivileged households after CPIB officers felt that they should take a step further to help these underprivileged residents of the Redhill estate. On the morning of 17 August 2012, the camaraderie of the officers was felt keenly as they spruced up the homes of the residents in Redhill Close. Other than helping to create a cleaner and more comfortable space for the elderly, the volunteers also interacted with residents and learnt more about their daily lives and difficulties. It was a day of deep reflection for those who participated in the event, as they realised how fortunate they have been.