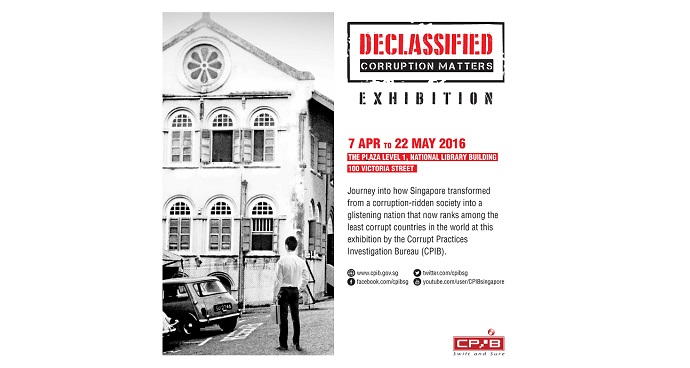 From a corruption-rife mudflats to a modern metropolis known for its efficiency and incorruptibility, visit the CPIB Exhibition “Declassified - Corruption Matters” to gain insights into Singapore’s battle against the venal. You will journey with the exhibition as it showcases how corruption-ridden Singapore transformed itself into the glistening nation that now ranks among the least corrupt countries in the world. You will be re-acquainted with our Founding Prime Minister, the late Mr Lee Kuan Yew and his vision in keeping Singapore corruption-free. You will plough through the declassified CPIB case archives, and read the stories of the Bureau’s investigation officers who rarely share their experiences.

The exhibition is opened to all public from 7 April to 22 May at the Plaza at National Library. From 2 June 2016, the exhibition will rove to selected regional libraries near you. Admission is free. The details are as follows: