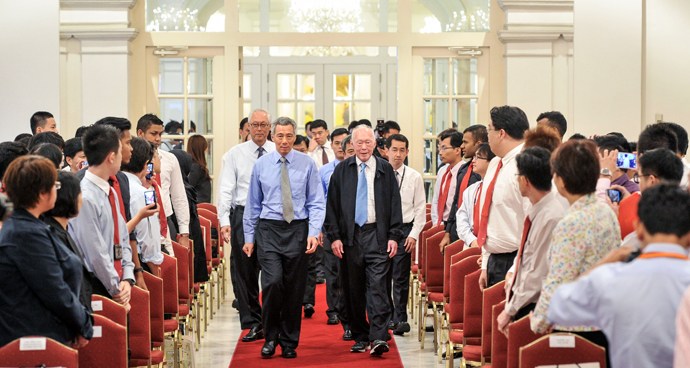 In his speech, PM Lee Hsien Loong congratulated the Bureau for this significant milestone and spoke about its contributions to Singapore’s success in eradicating corruption and cultivating a culture of integrity and corruptibility.

Founding Prime Minister, the late Mr Lee Kuan Yew launched the new CPIB coffee table book when he presented each copy personally to the Directors of CPIB past and present. It was a proud moment for each one of them. The publication which captured the Bureau’s journey in the fight against corruption as well as its growth and transformation throughout the formative years, was given to all the guests present. The late Mr Lee Kuan Yew had been instrumental in transforming a corruption-rife Singapore into its current position as one of the least corrupt nations in the world in one generation. His presence at the event, therefore, had a very special meaning.

A commemorative video capturing the memories and thoughts of the CPIB officers was screened during the Ceremony. The Channel News Asia also specially produced a one-hour documentary entitled “Corruption Crackdown: Inside the CPIB”, commemorating this significant milestone. The 60th anniversary celebration would be etched in the mind of every CPIB officer for a long time to come.