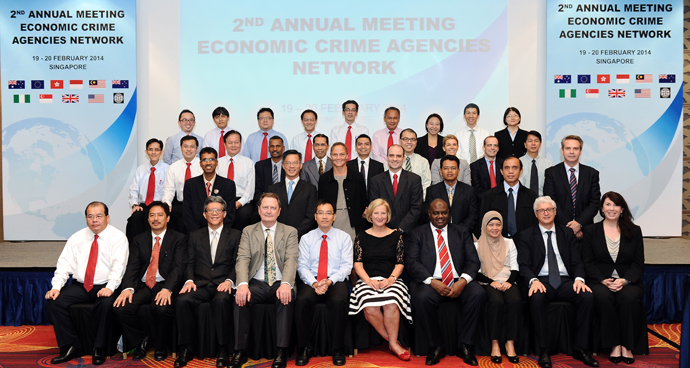 From 19 to 20 February 2014, the CPIB hosted 22 delegates from 10 international economic crime-busters for the 2nd annual meeting of the Economic Crime Agencies Network (ECAN).

The ECAN is a formal network of law enforcement agencies from various countries which are involved primarily in investigating and combating economic crime, including fraud, bribery and corruption. The idea of the network was first mooted in 2012 by a mutual desire of different enforcement agencies to explore ways to cooperate and share information in order to fight economic crimes across jurisdictions effectively and expediently.

The foreign guests had a great opportunity to network with Singapore participants from CPIB, Commercial Affairs Department (CAD) and the Attorney-General’s Chambers (AGC).

Director CPIB Wong Hong Kuan, the Chair of the Second Annual Meeting, acknowledged the increasing sophistication and transnational nature of economic crimes today, and the corresponding challenges faced by enforcement agencies. He emphasized the importance of close cooperation amongst agencies to tackle the scourge of such crimes in a more targeted and expedient manner. With all the help needed, he was heartened by the inclusion of another two agencies - the Economic and Financial Crimes Commission of Nigeria and the World Bank’s Integrity Vice Presidency in the Network.

During the course of the meeting, each participating agency had a chance to share on trends and statistics, industry best practices, cases of interest and valuable learning points gleaned from their unique individual experiences. Some of the areas discussed included money laundering; subsidy crime; fraud; email hacking and identity theft, to name a few.