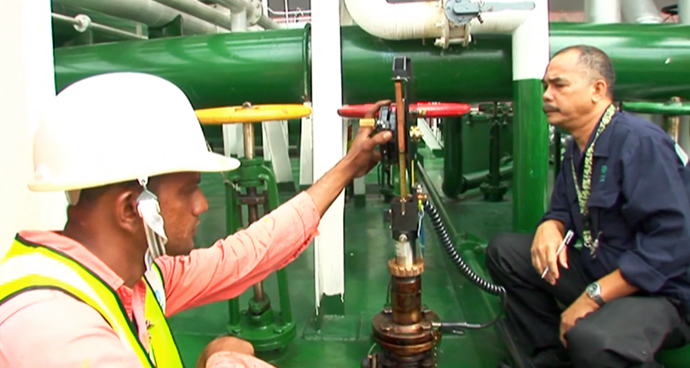 Antonov Sergey was the Chief Engineer of the vessel MT Front Splendour while Choo Soo Beng was a Cargo Officer with Sea Hub Energy Pte Ltd assigned to the bunker barge MT Ivory. These individuals ensured that MT Ivory delivered a shortfall of marine fuel to the vessel - MT Front Splendor. The vessel had received less fuel than the amount of 2,662.389 metric tonnes as stated in the documents. The intent of this endeavour was to enable the buying back of the extra fuel. Sergey’s ship, the MT Front Splendour, had ordered marine fuel from supplier Sea Hub Energy to be supplied on 20 January 2013. However, Choo had struck a deal with Sergey to accept a short delivery of marine fuel in return for a bribe of US$8,400.

Lam Tat Fei, colleague of Choo and a boatman under the employment of Sea Hub Energy, received US$200 from Choo for his part in the transaction. Lam was responsible for obtaining confirmation to proceed with the deal, and for delivering the amount of US$18,000 to pay for the extra fuel resulting from the shortfall. An independent bunker surveyor working for Saybolt Singapore Pte Ltd, Loh Tuck Seng, was also bribed to provide false declaration that 2,662.389 tonnes of fuel had been received by MT Front Splendour from MT Ivory, instead of the actual 2,542 tonnes delivered. Loh received US$400 and US$5,500 from Sergey and Choo respectively. To account for the extra fuel on board MT Ivory, Choo falsified a barge transfer advice and the stock movement logbook to indicate a bogus transfer of fuel from another vessel, MT Hai Soon X, to the MT Ivory.

The CPIB started its investigation after it had received information on the case.

The four men were charged for their part in the illegal “buyback” transaction which constituted a corruption offence. Antonov Sergey was sentenced to 2 weeks’ jail, fined S$30,000 and ordered by the Court to pay a penalty* of US$6,750 which was the amount not recovered. Choo Soo Beng was jailed for 8 weeks while Loh Tuck Seng was jailed for 2 weeks and fined S$25,000. Lam Tat Fei was sentenced to 6 weeks in prison and ordered to pay a penalty* of US$200. The amounts of US$3,900, US$5,900 and US$1,250 were seized from Choo Soo Beng, Loh Tuck Seng and Antonov Sergey respectively and these were forfeited to the state.